I had some complaints about this blog. It’s called “Cats and Code” but apparently there’s too much code, and not nearly enough cat action. Well, let’s fix that.

You may recall from blogs passim that our cats, since moving to the current house, live in a heated shed in the garden. I think they love it:

A true cat palace, I think you’ll agree. We visit several times a day for feeding and cuddles, and mostly they’re out in the fields behind our house, failing to catch any wildlife.

One thing I miss is just being able to check up on them any time, to see that they’re okay. When they were in the house, of course you’d see them all the time. A good friend of mine mentioned cheap wireless webcams (or CCTV cams).

In this blog post and probably one other, I’ll talk about my selection and installation of the camera and how I made it Internet accessible (well, it’s still “Cats and Code” after all). Here’s an executive summary of the story: 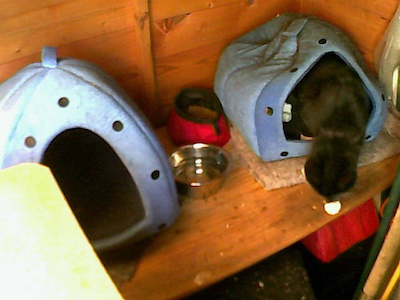 Enough sleeping... it's time for hunting.

Several companies make so-called Internet-enabled cameras, for different budgets and with varying software quality. At the domestic end of the market are:

After some research online and a trawl through the Amazon marketplace, I selected the Loftek CXS 3200 Black. I didn’t want to spend much money at all, in case no camera would work inside the shed, but this model at least had good reviews and several useful features.

Like most similar models the camera can pan and tilt and runs an embedded web server so you can view the video and control the camera. The 3200 automatically switches between day and night vision modes, but interestingly includes the “IR cut” feature. This filters infra red when in day vision mode, to solve the common problem of (e.g.) green foliage appearing purple.

The camera is, of course, wireless, which is handy because the shed has power but no networking. I mounted the camera upside-down as in the image below, and was pleased to find the 3200 has settings to invert the image and pan/tilt controls so everything appears the right way up when viewing the video feed. 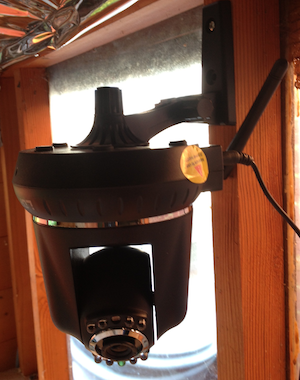 In the next post I’ll talk about the technical set-up of the camera on our home network.

This entry was posted in cats, video. Bookmark the permalink.